WTI oil futures (March delivery) mark their fifth straight bullish week. Having fully recovered from the November selloff, the price managed to print a new seven-year high at 86.77 on Wednesday, but a close above the previous peak of 85.39 looks like a tough task for the moment.

The RSI and Stochastics warn that the extended rally is too stretched and a bearish reversal should not come as a big surprise in the near term. Yet the indicators are still fluctuating above their 70s and 80s overbought respective levels and have not yet shown convincing signs of weakness. Therefore, the upside pressures might linger a bit longer before the next downside correction occurs.

On the positive side, there are no major obstacles until 90.00 rounded level, last seen in September 2014. Further gains from here could test the 94.00 – 96.00 region before all attention turns to the key psychological figure of 100.00.

Otherwise, a pullback below former resistance near 84.45 could immediately stop in the 83.00 – 82.00 area, where the supporting Tenkan-sen red line is positioned. Then, a step below the 81.00 handle could produce a more aggressive decline, potentially towards the restrictive 77.38 region, unless the 20-day simple moving average (SMA) at 79.38 comes to the rescue. .

In summary, the five-week rally in WTI oil futures may slow in the coming sessions as overbought signals flash red, but the price may push for further gains first. 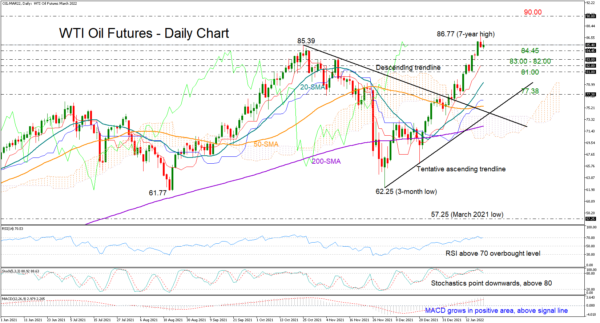