In this Part 99, we draw our attention to the 2021 audited financial statements of Hess Exploration and Production Guyana Limited (the Branch) which, despite its name, is actually a branch of a Cayman Islands incorporated subsidiary of the US oil major Hess Corporation headed by John Hess. Of the heads of the three contractors to the 2016 oil deal, Mr. Hess is by far the most open, even talkative, when it comes to Guyana. But not without reason.

Guyana is the jewel in Hess’s crown, its cash cow, its redemption and its future. From zero two years ago, Guyana accounted for more than 25% of the Company’s global crude oil production in 2021, even as Hess saw its North American production decline by more than 20% between 2019 and 2021. And of gross revenue and net undeveloped area, Guyana accounts for 45.9% and 43.7% respectively, while 25% of the Company’s proven reserves are located in Guyana.

The tax information is both revealing and justifies the fears of commentators. The consolidated income statement shows a tax charge of $600 million, but that includes the $113 million “paid” by the government of Guyana on behalf of the local branch for which Hess gets a token receipt. In a discussion of taxes, the report informs the reader that the tax burden in 2021 was “mainly due to higher pre-tax income in Libya and Guyana”. The report also shows that income tax attributed to Guyana and Libya accounted for 92% of taxes shown as an expense in Hess’s report for 2021. It is unclear whether the $436 million Americans indicated as paid in Libya in 2021 was a paper. transaction as is the case with Guyana, but given Libya’s sensible and logical position vis-à-vis the oil companies, it is unlikely that the country’s political leaders will be so brazenly obsequious towards the companies oil companies as Guyana’s leaders and key politicians have always been.

It would be ironic but not surprising if, in the near future, the lion’s share of taxes due in the Hess world would come from Guyana! Note 15 of the Report leaves no room for speculation or deduction – Hess paid no taxes in its home country from which it derives two-thirds of its crude oil production! Yet oil companies are prepared to argue in Guyanese courts that if they have to pay taxes in Guyana, their business will suffer.

But things are going so well for John Hess and shareholders that in his letter to them, he confidently predicted that the Company’s four generating assets would generate free cash flow in 2022 and is in a position to increase its cash flow at a “compound rate of 25% per annum until 2026”. It’s only getting better: with the start of Liza Phase 2 production in February 2022, at full capacity, Hess is expected to add more than $1 billion in net operating cash flow per year, after repaid the remaining $500 million of its term loan; distributed a 50% increase in the quarterly dividend; and pledged to return up to 75% of its adjusted free cash flow annually to shareholders by increasing dividends and accelerating share buybacks.

And to think that Hess has less than a third interest in the Stabroek block. But Hess, and even more so Exxon, enjoy such trust and respect from the government and opposition in this country that they are proud to brag about their cooperative relationship with oil companies. and defend the unjust contract.

We now turn to the financial statements of the Guyana branch in which all figures are in Guyanese dollars, unless otherwise indicated. 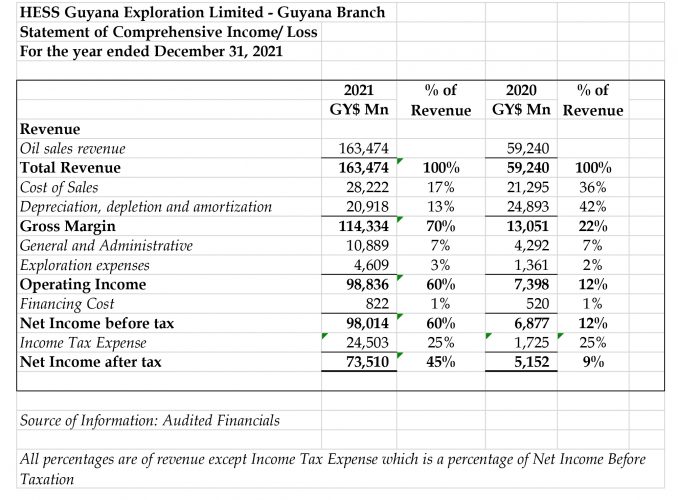 Using information from Hess Corporation’s report on the average price obtained for Guyanese crude, the branch sold approximately 11.4 million barrels in 2021, compared to approximately 6.1 million barrels in 2020. The branch’s financial statements indicate that it had no transactions with related parties in 2021. , suggesting that those who direct the sale of the branch’s production are bypassing the Group’s marketing subsidiary and choosing other outlets to dispose of its share of oil profit and recoverable costs.

Of the $163,474 million, deductions are made for cost of sales ($28,222 million or 17% of sales) and depreciation, depletion, and amortization (PAD) ($20,918 million dollars or 13% of revenue), leaving a gross margin of $114,334 million or an incredible 70%. A separate note shows that the cost of sales is made up of production expenses of $25,635 million, royalties of $3,923 million and inventory change of $1,337 million. The royalty as a percentage of sales is 2.40%, compared to 2% provided for in the Petroleum Agreement. The DPA is made up of $20,874 million for development assets, representing approximately 5% of development assets, and $44 million for leasehold assets, representing 4% of such assets.

Note 5 indicates that additions to property, plant and equipment include the impact of new provisions and revisions for decommissioning obligations.

Deductions are also made for general and administrative expenses of $10,859 million, compared to $4,292 million in 2020, and include pre-development costs for future projects, and exploration expenses of $4,609 million. dollars, versus $1,360 million, suggesting several cases of productive operations carrying the cost of exploration activities. This violation of accounting, tax and petroleum principles would only be tolerated in Guyana.

The income statement also shows a financing cost of $822 million, compared to $520 million in 2020, an amount which is also shown in the note on provisioning on the balance sheet. After all of these costs are deducted from revenues, the Branch reports pre-tax net income of $98,013 million (2020 – $6,877 million), which, absent the Petroleum Accord, would be subject to the corporation tax (25%) and withholding tax (20%) on deemed distribution branch (BPT) profits tax. A deemed distribution is the balance of profits after corporation tax less any reinvestment of those profits, subject to the approval of the Commissioner-General.

The agreement also stipulates that this tax must be included in the contractor’s taxable income, which means that the $98,013 million must be treated as if it were an after-tax amount, requiring a gross-up. .

Since the agreement exempts the oil companies from the BPT, Management then deducts the 25% of the profit, or $24,503 million, (2020 – $1,725 ​​million) as if it were an overdue real rather than a benefit to be increased under Article 15.4. of the Petroleum Agreement. Hess, the parent company, then gets a double benefit by reporting it as foreign tax paid in its US financial statements.

By using its own accounting brand, which treats a benefit as an expense, Hess records an after-tax net income of 45%, instead of 70%. 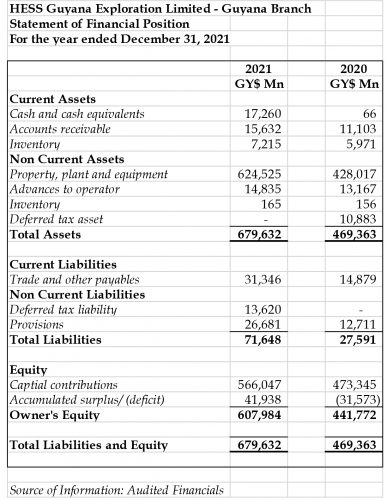 Management’s cash resources stood at $17,260 million, a substantial increase from $66 million as of December 31, 2020, while its commitments for capital expenditures on the Stabroek block were approximately $607,000 million (US$2,900 million), compared to Guinean dollars (US) 544,000 million. United States dollars: 2.6 billion dollars), “to be committed over the next few years”.

As in 2020, the financial statements reveal very little disclosure. Readers are no better informed about what makes up exploration, operating expenses, and lesser general and administrative expenses. Even the most ordinary company in Guyana produces more informative, easier to read and superior financial statements than the Guyana branch of Hess. What is particularly noteworthy is that the financial statements of the Hess branch are not consistent with those of its parent company overseas or any of its joint venture partners there.

The next column will present the financial statements of Esso Exploration and Production Guyana Limited.