It’s the first week of March, which means we get our first glimpse of where the economy was going in February, when the Omicron wave started to subside. This morning, the US Bureau of Labor Statistics surprised the market with 678,000 jobs created in February, well above the 400,000 predicted by forecasters. This was on top of an upward revision of 92,000 in December and January. The unemployment rate fell to 3.8% – the lowest figure since the pandemic, just 0.3 percentage points above the level two years ago. The labor force – a measure of people working or actively seeking work – also rose. The labor force participation rate reached 62.3% after 304,000 people joined the labor force in February (Chart 1). Overall, the labor market is getting tighter and tighter.

Meanwhile, the main activity indicators have diverged. As measured by the ISM index, the manufacturing sector reversed three months of decline, accelerating to 58.6. Demand was strong, with new orders once again rising above 60. Production picked up, but could have been even stronger had it not been for material supply constraints. The backlog index jumped nearly 9 percentage points (ppt), while supplier shipments rose 0.5 ppt. Despite all these challenges, inventory rebuilding continued, albeit at a very slow pace, adding just 0.4 percentage points in February.

Surprisingly, the services sector slowed in February, with both demand indicators – business activity and new orders – falling to average levels of 50, last seen exactly a year ago. The consensus expected a modest increase, expecting the disappearance of the threat from Omicron to help the service sector rebound. Respondents blamed post-holiday fatigue and tough business conditions, impacted by capacity constraints, inflation, logistical challenges and labor shortages. Indeed, supply-side indicators deteriorated as delivery times slowed again while the employment index slipped back into contraction territory.

Price sub-indexes remained elevated, although pricing pressures appear to be easing in manufacturing, while services continue to struggle with a reading above 83 (Chart 2). Despite these differences, there is little doubt that next week’s CPI reading will be well above the 2% target. With the threat of higher prices becoming more entrenched, the Fed is unlikely to hesitate to raise the fed funds rate by 25 basis points on March 16. 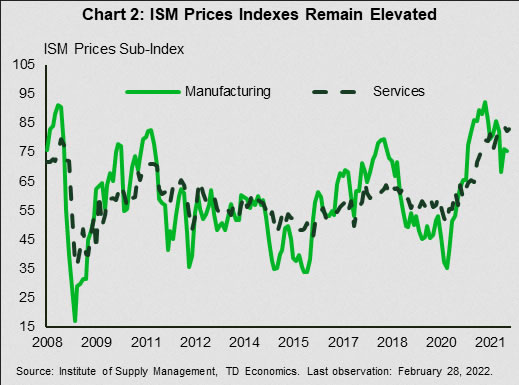 Meanwhile, Russia’s invasion of Ukraine reverberated through financial markets, pushing a key measure of volatility to its highest level in more than a year. Although US trade dependence on Russian and Ukrainian products is limited to less than 1% (according to the World Bank), the US economy could suffer through other channels. The dispute has already resulted in the biggest weekly rise in commodity prices since 1974 and threatens to exacerbate pandemic-induced logistical challenges. These two forces will lead to higher prices and a drag on economic growth. Meanwhile, further deterioration in financial conditions would equate to monetary tightening, which could force the Fed to slow the pace of rate hikes going forward.

Not surprisingly, the Bank of Canada launched its path to monetary policy normalization from the extraordinary framework it maintained during the pandemic. On Wednesday, the Bank raised its key rate by 0.25 percentage points to 0.5%, the first in a series of rate hikes.

The Bank of Canada’s decision follows the release of economic data for the fourth quarter of 2021 which showed the Canadian economy recorded robust growth of 6.7% annualized in the quarter and 4.6% for the whole year. The economy grew strongly at the end of the year, although household spending was relatively weak and spending on goods fell slightly. Instead, growth was driven by companies that increased production in order to replenish inventories that had been reduced by the combination of supply constraints and past strong sales (Chart 1). 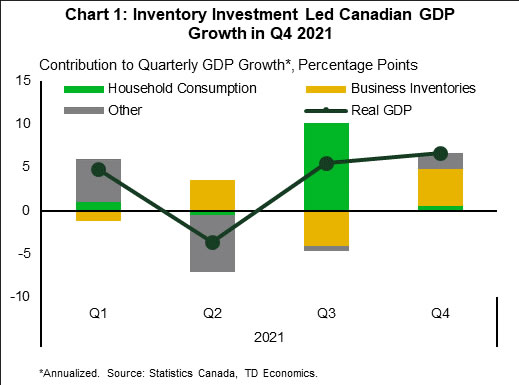 The Bank’s rate decision comes as the global economy is plunged into a period of heightened uncertainty due to Russia’s invasion of Ukraine. The war in Ukraine will aggravate supply constraints and exacerbate inflationary pressures. There is little the Bank of Canada can do to prevent this. It does, however, have leverage to, as Governor Tiff Macklem noted in a speech after the decision, “reduce the parts of inflation that are driven by domestic demand.” Higher borrowing costs will dampen demand in interest rate-sensitive sectors of the economy, such as housing, which have seen the fastest price appreciation during the pandemic. Monetary policy won’t slow inflation by a penny, but rate hikes are now needed to bring inflation back on a lower path over the next year.

In addition to rate hikes, the Bank of Canada will begin to normalize its balance sheet, which has soared to more than 20% of GDP following large-scale asset purchases of government bonds. Governor Macklem came out strong in his message on the central bank’s plans for quantitative tightening (QT), noting that the maturity of the Bank’s holdings is relatively short, and by simply letting them mature, the Bank could get closer to its pre-pandemic position over the next two years. Communicated in advance, QT is unlikely to put significant upward pressure on interest rates, but it will slow deposit growth and help tighten financial conditions.

Financial market tensions will be an important indicator to watch in assessing future monetary policy decisions as well as the economic outlook. So far, credit spreads have remained relatively contained, widening but not yet to worrying levels (see Chart 2). Equity market volatility increased, but North American equity markets moved sideways instead of falling significantly. The TSX performed better than the other indices, reflecting its energy bias. As of this writing, it was within a week. This may not last. Financial volatility and stress are likely to worsen as the conflict drags on. 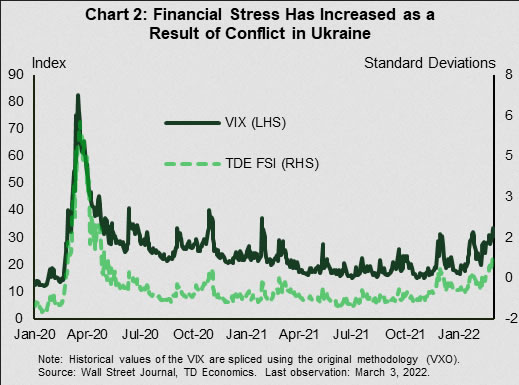