Gold’s latest positive slant is finding help from the ascending Ichimoku lines after finally managing to shake off the month-long sideways market the commodity embraced from the second half of March. The recent rise in the slopes of the 50 and 100 period simple moving averages (SMA) have now aligned with the 200 period SMA which continues to sponsor the larger uptrend.

Ascending Ichimoku lines indicate positive forces are intact, while short-term oscillators send mixed messages in directional momentum. The MACD has stabilized above its red trigger line in the positive region, while the RSI is regaining ground in the bullish zone. The Stochastic Oscillator is now reflecting some reduction in its negative charge and may begin to favor bullish price action.

If the Ichimoku lines continue to hold the price supported, bullish friction could come from the nearby 1979 barrier. If persistent upside pressures also conquer the 1990-1995 resistance band, which was formed by the first half of March, and break above the adjacent psychological 2000 mark, buyers could then gain confidence to challenge the March 10 peak of 2009. Further advances in the precious metal could then drive the price towards resistance of 2,035.

Alternatively, if the positive momentum fades, initial support could come from the red Tenkan-sen line at 1,964. Further decline in the price of the yellow metal could test a potential support trendline drawn from the 1 low. 915 ahead of the blue Kijun-sen line at 1950. From there, if the support region between the 200-period SMA at 1943 and the 100-period SMA at 1936 fails to defend positive developments, sellers could start to build their edge. Additionally, a drop in price past the cloud and base 1915-1920 may encourage sellers to target the key support base 1890-1900.

In summary, gold’s biggest positive structure is defended by the 1878-1886 boundary and the 1890-1900 support base. earnings. For the positive outlook to deteriorate, the price would have to drop below the support line and the SMAs. 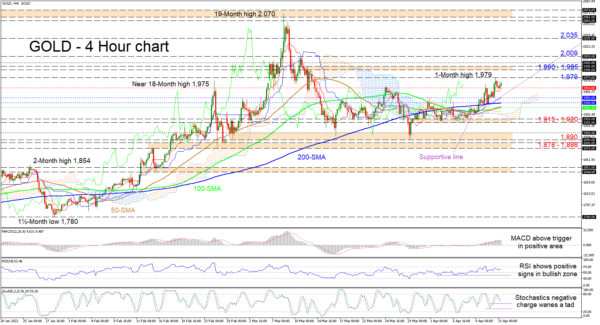