The GBPAUD has seen extreme losses over the past few weeks, hitting a 12-month low at 1.7731. Since then, the pair has seen a minor bounce as the negative pressures appear to ease. However, the 50-day simple moving average (SMA) looks poised to cross below the 200-day SMA, bolstering the thesis of a sustained bearish outlook.

Short-term momentum indicators paint a mixed picture, with the RSI stable below its neutral 50 mark. Nonetheless, the MACD recently broke above its red signal line despite being below zero, indicating that the negative price momentum may fade.

If negative pressures persist, initial support may be found at the March 2021 support at 1.7810, before sellers target the 1.7731 hurdle. Breaking below the latter could intensify selling pressures, opening the door for the February 2021 low at 1.7685.

On the contrary, if the bulls manage to break above the 1.8121 level, the next resistance line could be the December low at 1.8385. Breaking above this point could then open the way towards the 1.8530 barrier, before buyers look at the 200-day SMA currently at 1.8617.

In short, despite the recent rise in recent trading sessions, the overall outlook for the pair remains bearish. For the sentiment to change, buyers would need to drive the price above the 200-day SMA. 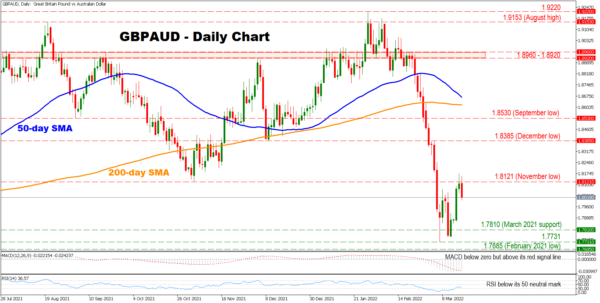